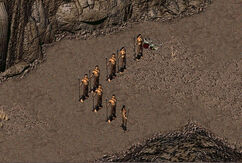 Hunters are tribals of Arroyo in Fallout 2.

Found in random encounters around Arroyo, hunters are tasked with bringing game back to the village. They bid the Chosen One well and wish to see them succeed in their quest.

Hunters get water, food and various useful items that the inhabitants of the settlement need in order to escape from drought. At the time of the Chosen One's appearance, they always carry a carcass of a dead small gecko.

As part of the random encounter, the Chosen One in the Arroyo area can meet groups of 6-7 hunters. They can appear as a normal group, sometimes they can be caught attacking a group of cannibals or radcorpions.

Hunters, under any conditions, will reoccur as an encounter until the Chosen One will procure the G.E.C.K.

These hunters appear only in Fallout 2.

Retrieved from "https://fallout.fandom.com/wiki/Arroyo_hunter?oldid=3089044"
Community content is available under CC-BY-SA unless otherwise noted.