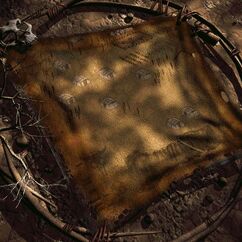 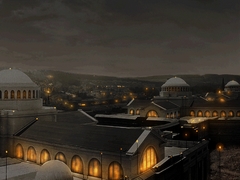 Play sound
Beyond the Canyon.ogg
“We founded the Village, beyond the great cliff. It is a secure home thanks to our hard work.”— Vault Dweller's memoirs

Arroyo is a settlement located in southern Oregon and founded in 2162 (construction completed in 2167) by the Vault Dweller following his exile from Vault 13 by Overseer Jacoren. Originally a tribal village, it would eventually rise in power after the Chosen One completed his quest and used the G.E.C.K. in 2242, becoming a large city under the NCR.

In May 2162, the Vault Dweller returned to Vault 13 after defeating the Master and his army, only to be exiled for fear of encouraging others to follow his example and leave the Vault. He wandered the desert but never moved far from the mountains that shielded the Vault from the rest of the world. Upon hearing of what happened to him, a few other residents of the Vault decided to leave and join, following soon afterward. The Vault Dweller eventually came into contact with the small group of dwellers. They knew little of the outside world and would have likely died if it were not for his knowledge and experience. After this, the Vault Dweller removed his jumpsuit, never to wear it again.

Two months later, the Vault Dweller headed north, to the great canyons, with a small group of former dwellers and wastelanders, and founded the village of Arroyo. Over time, their ragtag group turned into a minor tribe. The Vault Dweller fell in love with a member of the tribe named Pat, and they raised a family. The construction of Arroyo was completed on August 18, 2167.

Initially, they would send scouts back toward the Vault, but that slowly came to an end. The Vault Dweller taught the others the skills they would need to survive and grow strong, such as hunting, farming, engineering, and warfare. The Vault Dweller and his spouse initially led the village. The tribe grew strong with their help. In 2188, a daughter, who later became the Arroyo elder, was born.

On January 16, 2208, several years after Pat's death, the Vault Dweller wrote his memoirs and vanished soon after, presumed dead. The Vault Dweller left the jumpsuit behind, folded on the bed. Some say he was taken by the sky spirits, others say that the Vault Dweller felt it was time to move on and leave the elders to guide Arroyo. After the one-moon (month) cycle of mourning for the Vault Dweller ended, activity in Arroyo began to return to normal.

The final training of the Vault Dweller's daughter for the role of village elder began on February 2. She underwent a great deal of physical training and tutoring in various sciences, mathematics, and weapon skills. Two years later, she took her mystic test, a key ingredient of which is several pots worth of hallucinogenic plants from Hakunin's garden. She ran the gauntlet in the Temple of Trials, using her charm to pass most of the tests after her handgun jammed and was ruined on the first level. She offered numerous criticisms of the test, resulting in many revisions. Two days later, she ascended to the role of village elder. She ruled with a steady hand, and her wisdom was greatly respected.

The elder's son, later called the "Chosen One", was born on March 23, 2221. His father was not recorded in the tribal records. In 2241, the worst dry season in many years caused a drought in the Northern California area, hurting crops and brahmin in Arroyo. The elder, having read a G.E.C.K. advertisement in her father's old holodisks, decided that her son must be sent to find it, as it was the village's only hope. On July 25, the Chosen One began his mystic test, descending into the Temple of Trials, just like his mother had many years before. Two days later, he left his home village to find the ancient device.

While the Chosen One was on his quest, on July 20, 2242, Arroyo was attacked by Enclave soldiers in Vertibirds, wearing power armor and armed with energy weapons, and the villagers were captured and brought to the oil rig. Some of them tried to resist the attackers and were killed, and Hakunin was seriously wounded. When the Chosen One returned to the village, he found it almost completely destroyed and found a dying Hakunin among the dead bodies. Now, the Chosen One had a new quest - to save his people from the hands of the Enclave.

The Enclave needed the tribals for their FEV experiments. They needed two test groups: one of clean, pure humans; and another composed of the "mutants" that lived all over the mainland, suffering radiation and FEV exposure for decades that, to the Enclave, made them unclean. The unclean sample was easily obtained by kidnapping the entire population of Arroyo. The clean group were the dwellers of Vault 13, who were reunited with their long lost Arroyo brethren in Enclave prison cells.

In Fall 2242, the Chosen One managed to enter the Enclave using a damaged tanker and destroyed the Poseidon Energy platform, killing the President of the Enclave and severely setting back the Enclave's plans for world domination. The surviving people of Arroyo and Vault 13 were free.

After the Enclave oil rig's fragmentation, the refugees of Arroyo and Vault 13 resettled, building a new community with the aid of the 'holy' Garden of Eden Creation Kit. Finding themselves hundreds of miles from their Vault, the members of Vault 13 chose to join the villagers in establishing a new community, and their technical expertise, combined with the villagers' survival skills, allowed the new settlement to grow and prosper. The two branches of the same bloodline were re-united, and their savior, the Chosen One, became Elder, presiding over the village for many years to come. The settlement would later come under the power of the New California Republic, with the taxes and inflation of the republic along with it.[1]

The village of Arroyo is divided into four areas.

This is the beginning area of the game. There is a clear path that leads into the Temple of Trials, but also a path leading back to the main village.

It is possible to talk the way through Cameron with high enough Speech and Charisma, as he is determined to make sure the entrant endures the trials of the elders. The only way to get past Cameron is to defeat him in hand to hand combat. You can also steal the Temple key from him and exit without having to fight.

The central village portion of Arroyo serves as home to most of the tribe. Hakunin's tent and garden - which has been infested with man-eating plants - inhabit the northwestern corner of the map, while the Village Elder's tent lies just south and west. And shortly south of it lies the town well, broken and dormant with the Chosen One's whiny nephew Feargus pouting about it a few feet away.

The south-most tent belongs to none other than your old, cranky aunt Morlis, who is in possession of a piece of a rather scarce flint. The large stone monument sits peaceful and quiescent immediately northeast of her tent. The wigwam residing on the east-most bounds of the map is home to Jordan, a skilled and seasoned hunter for the tribe. The rest of the homes belong to generic tribesmen and women.

The hunting grounds northwest to the village foster a steady pack of small geckos that serve as a source of food for the tribe. Just as well, there are a few cuttings of xander roots and broc flowers growing in the alcoves formed by the abundant foliage. These can be brought to Hakunin to be synthesized into healing powder.

In the northwest corner of the map, in the secluded flat where spots of radioactive waste can be found, Nagor's dog Smoke is trapped by a few hostile geckos lurking near the only path back to the village.

Note that the geckos are not hostile, with one exception. If this gecko attacks you and any other geckos see that, the other ones will join in as well.

This section of Arroyo is not so densely populated, as only a few vigilant tribe members keep watch over the sole passageway into the village. Mynoc, the young warrior standing immediately next to the bridge, will offer to sharpen the Chosen One's spear before his departure, requiring a piece of flint for the job.

The bridge connecting Arroyo to the wasteland serves as a metaphorical gateway for the Chosen One. It is here that the player leaves their tribe bearing the quest to find the G.E.C.K., and prove to be their salvation. The canyon which the rope bridge extends across bears ancestral drawings likely created by past - possibly present - tribe members upon the establishment of the village.

The Chosen One gets here with a G.E.C.K. in hand. Enclave troopers have destroyed the village and took the rest of the tribals to Enclave Oil Rig. Hakunin is still alive to tell the Chosen One what to do now.

Arroyo appears in Fallout 2 as a small tribal village and in Fallout: New Vegas, Emily Ortal mentions that she has family living there.[2]

“The name came first. I was looking on a map and saw the word. I liked it, both the sound of it and what it meant. So I picked it as the name, and then told the artist making the map what arroyo meant, so he'd be sure to make it be an arroyo.”— Tim Cain, Fallout Bible 8

Yet another Arroyo tent

Another canyon tent
Add a photo to this gallery

Retrieved from "https://fallout.fandom.com/wiki/Arroyo?oldid=3487546"
Community content is available under CC-BY-SA unless otherwise noted.