xx008893
“We should have given you a better welcome on your first visit to Zion, but from what I hear, the White Legs beat us to it.”— Joshua Graham

Arrival at Zion is a main quest in the Fallout: New Vegas add-on Honest Hearts.

Shortly after the completion of Happy Trails Expedition and the Courier's initial arrival in Zion, a group of White Legs will ambush the caravan, killing everyone but the Courier. There is no way to save the caravan members, as their deaths are scripted, and they will die even if all but one ambusher is killed, this last ambusher is unkillable until the last member of the caravan dies.

After crossing the bridge towards the rest of Zion, the Courier will be attacked by a White Legs tribal from a distance, standing upon a large rock. This ambush will be thwarted by Follows-Chalk, a scout from the Dead Horses tribe who can join the Courier as a companion. It is possible to let him join immediately, or he can be sent away. If he joins the Courier, he will provide a scripted commentary on the way to the Dead Horses camp.

If Follows-Chalk joins the Courier, he will point out a hollow log that contains random minor loot. Not far down the path towards Dead Horses camp, a non-hostile giant yao guai will make a brief appearance in a scripted event. Further along the path, Follows-Chalk will note a cliff. Climbing to the top is the first opportunity to make use of the Well-Stacked Cairns perk. When getting close to the Dead Horses camp, Follows-Chalk will warn about traps set in the river to keep marauding White Legs at bay. Furthermore, if the Courier wanders too far off course, he will comment and remind the player that they are supposed to be heading towards his camp.

On arrival at the Dead Horses camp, the Courier is told to enter Angel cave and follow it until they find their leader, Joshua Graham. Engaging in conversation with Graham will complete the quest.

One can also opt to simply kill Follows-Chalk, which fails this quest and triggers Chaos in Zion. Triggering Chaos in Zion disallows participation in all other quests in the Honest Hearts add-on, and subsequently all of its quest-related trophies. 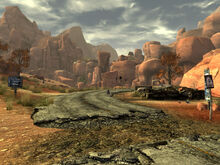 Encounter with some geckos on the way to the Dead Horses camp
Deutsch Español Polski Русский Українська
Community content is available under CC-BY-SA unless otherwise noted.
... more about "Arrival at Zion"
RDF feed
Has platform
Xbox 360 +, Playstation 3 +  and PC +
Advertisement