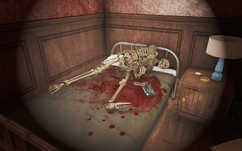 Captain of the USS Democracy (formerly)

Captain Arnold Wabash was the commanding officer of the nuclear submarine USS Democracy in 2077.

Captain Arnold Wabash was a nuclear submarine captain of the United States Navy in 2077. It is unknown what action he had seen as captain prior to his submarine docking for repairs in 2077.

At some point in 2077, the USS Democracy entered Mount Desert Island Naval Facility for repairs after a deployment. Wabash received his orders from Rear Admiral Edward Grath, in Washington, D.C.[citation needed] Wabash learned from Grath that his ship was to be deployed to the South China Sea sooner than they anticipated and that repairs were of utmost priority.[1] Wabash knew the Democracy was likely being deployed to launch her nuclear missiles at China. Because of this, he sabotaged his submarine's nuclear reactor, causing radiation to leak everywhere inside the ship and most of the submarine base, causing weeks of delay.[2] This was viewed by Washington to be an accident, though Grath suspected foul play.[3]

While leaving the base, Wabash contacted his mistress, Franny Richardson, by terminal and holotape, in which he confessed he couldn't possibly partake in nuclear war, that it all seemed insane to him and invited her to their hotel room at the Harbor Grand Hotel. He said they could just pack up everything on their boat and leave everything behind.[4] Franny then confronted Arnold in their hotel room at gunpoint. Unbeknown to Franny, Arnold also had a concealed pistol. Franny then tortured Arnold, saying he was a coward and demanding the location of the nuclear launch key for the Democracy's missiles. Arnold gave in, and told her he hid the launch key on their boat, at Fringe Cove docks, as well as telling her the combination for the safe containing the key. Before she could leave however, Arnold shot and killed her, in one final act of defiance. He would later die in the hotel room from wounds he received during the torture.[5]

Arnold Wabash appears only in the Fallout 4 add-on Far Harbor.

Retrieved from "https://fallout.fandom.com/wiki/Arnold_Wabash?oldid=3149857"
Community content is available under CC-BY-SA unless otherwise noted.