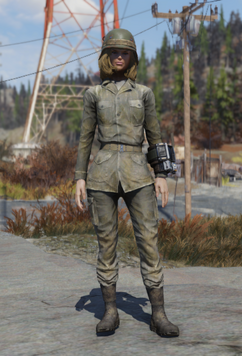 The Army fatigues and Army helmet are an outfit set in Fallout 76.

This outfit consists of olive drab fatigues and combat boots worn over a white crewneck shirt. When equipped, Army fatigues will be worn over the player character's equipped armor.