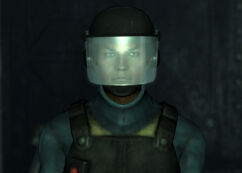 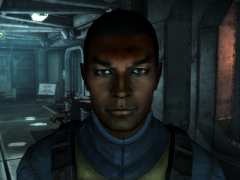 Armstrong without his helmet

“Okay, let's try this slowly. When you and your daddy left, there were problems. Those problems were bad. Amata and some others said we should try opening the door and going outside more. The Overseer said that was bad, too, and he got angry. Now, just about everyone's angry down here. And things are still bad. Really bad.”

Officer Armstrong is a member of the Vault 101 security team. He is located in the room just beyond the vault entrance when the Lone Wanderer enters the vault as part of Trouble on the Homefront.

Armstrong appears only in Fallout 3.

Retrieved from "https://fallout.fandom.com/wiki/Armstrong_(Vault_101)?oldid=3314550"
Community content is available under CC-BY-SA unless otherwise noted.