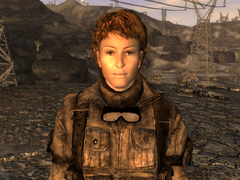 Merchant without her hat

“You a merc? 'Cause you don't look like a prospector.”

The arms merchant is a former NCR soldier running a weapons stall at the 188 trading post in 2281.

She operates her business out of the back of a pre-War military truck at the 188 trading post. At night, she can be found asleep in the trailer on the opposite side of the underpass. Nevertheless, she will be happy to both talk and trade if awoken.

The woman who offers a large selection of weapons and ammunition at bargain prices at the 188 is a staunch supporter of the NCR, who used to serve with the Republic's Army. More specifically, she was a staff sergeant, third platoon of Bravo Company. She fought in the First Battle of Hoover Dam, witnessing first hand the brutal struggle with the Legion.[1] Three years later, she found herself selling weapons at the 188 trading post, due to an administrative discharge. The reason was as simple as it was heartless. In 2280, her commanding officer ordered her to flog two deserters, she refused, telling him off in words that were as soldierly as they were true. The deserters were actually two kids that got drunk on the Strip and managed to miss roll call. She was discharged from the military for her insubordination but was officially filed as administrative discharge.[2][3]

Now without a job, the arms merchant didn't leave to head home for New California. Despite everything, she remained fiercely loyal to the NCR and she didn't feel it was right, with the Legion preparing for an attack on the other side of the river. Instead of going back, she joined forces with a couple of other veterans, bribed a Gun Runner for the munitions, and started selling weapons to everyone supporting the New California Republic, a small, but powerful contribution to the war against Caesar's Legion. They cut their profit margins as much as possible to make weapons affordable without going bust. Paired with the old army truck, she can travel with her stock at a moment's notice. For her, the 188 post, apart from being the local hub of commerce and trade, has the added benefit of being able to see her old platoon from time to time, giving them some surplus ammunition and making sure the new commanding officer is treating them properly.[4][5]

Her perpetual source of frustration is the inactivity of the NCR and the brass. Instead of focusing on knocking out the Legion, the NCR is breaking itself apart dealing with hundreds of smaller problems, losing track of the big picture.[4]

She sells Gun Runners' Arsenal items only when she's standing next to the truck during the day.

The Arms merchant appears only in Fallout: New Vegas.