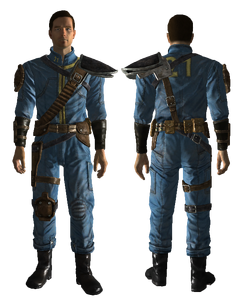 The armored Vault 21 jumpsuit is a piece of armor which was cut from the final version of Fallout: New Vegas.

This item was cut from the final version of the game and can only be obtained through console commands.

Retrieved from "https://fallout.fandom.com/wiki/Armored_Vault_21_jumpsuit?oldid=1219936"
Community content is available under CC-BY-SA unless otherwise noted.