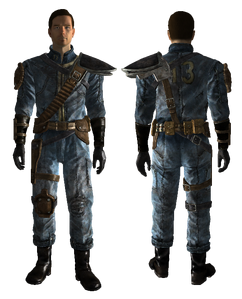 The armored Vault 13 jumpsuit is a piece of armor in Fallout: New Vegas. It is available to those who pre-ordered the Classic Pack from EB Games, GameStop and GAME. Alternatively, the add-on Courier's Stash which contains all of the pre-order packs can be purchased, or buying the Ultimate Edition which includes all add-ons.

Originally, the only way to acquire this armor was by redeeming the code that came with the pre-order exclusive Classic Pack. It can now also be acquired by purchasing the add-on Courier's Stash.

The armored Vault 13 jumpsuit appearing in the ending of Fallout 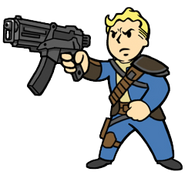 As depicted in Up and Comer
Deutsch Русский Українська 中文
Community content is available under CC-BY-SA unless otherwise noted.
Advertisement