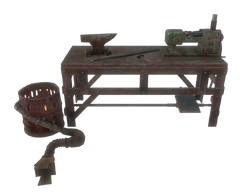 The armor workbench is a crafting table in Fallout 4.

The Sole Survivor can use the armor workbench in order to attach and detach armor mods on body armor parts and some clothing pieces. The armor parts that can be modified are divided into chest, right arm, left arm, right leg and left leg. Armor workbenches can be found all over the Commonwealth, including one outside a house nearby the workshop in Sanctuary Hills, along with a weapons workbench and a power armor station.

Some clothing can be upgraded at the workbench, such as Vault jumpsuits and red dresses.

When applying an armor mod, the name of the armor part can change accordingly. To create a mod, the Sole Survivor needs proper materials, as well as the corresponding perk, Armorer. The Armorer perk has four ranks, and each rank unlocks another rank tier for armor crafting.

Some mods will add additional functions to the armor piece.

The legs armor have special mods:

With the second level of the Local Leader perk the Sole Survivor can craft weapons workbenches in other settlements.

These can be used at any time by the player.

Fallout: Wasteland Warfare model
Add an image to this gallery
Retrieved from "https://fallout.fandom.com/wiki/Armor_workbench_(Fallout_4)?oldid=3130517"
Community content is available under CC-BY-SA unless otherwise noted.