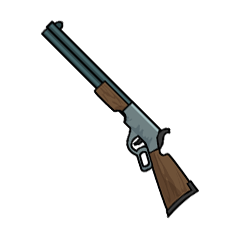 “With this beauty, they may as well not even be wearing armor.”— In-game description

The armor piercing lever-action rifle is a weapon that appears in Fallout Shelter.

The armor piercing lever-action rifle is a rifle equipped with armor piercing rounds in Fallout Shelter that uses a lever to load cartridges into the barrel's chamber for firing. Dealing a minimum of 4 damage per attack, it has the second lowest damage output for a rifle in the game.

Armor piercing lever-action rifle card
Add an image to this gallery
Retrieved from "https://fallout.fandom.com/wiki/Armor_piercing_lever-action_rifle?oldid=3101567"
Community content is available under CC-BY-SA unless otherwise noted.