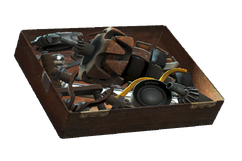 An armor piercing automatic receiver provides an improved rate of fire and armor penetration, in exchange for reduced range and inferior damage. Attaching this receiver to a weapon converts it into a fully automatic weapon. This change also causes the perk which affects the weapon's damage to be changed to Commando over either Gunslinger or Rifleman.

Due to the way damage is calculated in Fallout 4, what 40% Armor Piercing does is actually increasing your damage output by +20% on ANY foe.

The recipe for this weapon mod varies depending on the weapon for which it is made:

Retrieved from "https://fallout.fandom.com/wiki/Armor_piercing_automatic_receiver_(Fallout_4)?oldid=3045345"
Community content is available under CC-BY-SA unless otherwise noted.