Armor of the 87th Tribe

Armor of the 87th Tribe 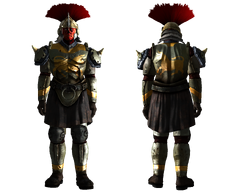 The Armor of the 87th Tribe is a piece of armor in the Fallout: New Vegas add-on Lonesome Road.

The personal armor of centurion Gaius Magnus, it is a full suit of heavy gauge steel similar to Legate Lanius's armor, with a light green and yellow tint, and the Bull of Caesar's Legion is painted onto the front and the back of the breastplate. The Roman numerals for 87, LXXXVII, are spelled out down the back right of the armor.

It provides a Damage Threshold of 22 as well as a bonus of +1 Charisma, +10 Action Points and +3 Critical Chance. With Jury Rigging, it can be repaired with any set of heavy armor. The Charisma, AP, and critical chance bonus come from an effect labeled as "87th Tribal Ways." 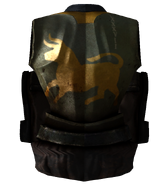 Roman numerals "LXXXVII" along the back
Español Polski Русский Українська
Community content is available under CC-BY-SA unless otherwise noted.
Advertisement