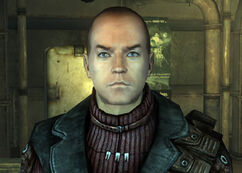 “No, thank you. Please leave Mr Zimmer and myself alone.”

Armitage, unit designation S3-47, is an android assigned as the bodyguard of Dr. Zimmer found in Rivet City in the year 2277.

Armitage is Zimmer's imposing bodyguard, a quiet individual. He will defend Zimmer to the death. Armitage is actually an android, or synth, much like the replicant. Armitage has the same schedule as Zimmer; he sleeps in the same room and eats the same food - not because he has to, but because he has been programmed to replicate human behavior as closely as possible.[1]

Armitage is one of Dr. Zimmer's many androids, created in 2242 at the Institute in the Commonwealth, a region to the north of the Capital Wasteland that was once the New England Commonwealth. His true identity can be revealed in a conversation with Zimmer or by killing him, upon which Armitage drops an android component.

Armitage will stay standing next to Zimmer until the quest The Replicated Man is completed.

Armitage appears only in Fallout 3.

Armitage has become a common cyberpunk name since William Gibson used it in his 1984 novel Neuromancer.

Retrieved from "https://fallout.fandom.com/wiki/Armitage?oldid=3272638"
Community content is available under CC-BY-SA unless otherwise noted.