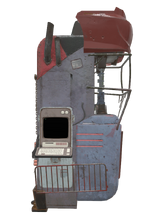 The ArmCo ammunition construction appliance, or ArmCo ACA, is a settlement object in the Fallout 76 update Wastelanders.

Similar to mineral extractors and scavenger collectron stations, the ArmCo ammunition construction appliance produces a certain amount of ammo dependent on the type chosen in the terminal. Unlike mineral extractors, the machine doesn't require power to function.

The construction appliance produces a set amount of ammunition every 1.44 minutes, with the exception of .50 rounds being produced every three minutes. The machine's container can hold up to one pound of generated ammo.

The ArmCo ammunition construction appliance can be built at a C.A.M.P. if the corresponding plan is known. The plan can be bought from Mortimer for 750 gold bullion upon reaching the Raiders reputation rank of Ally.

Retrieved from "https://fallout.fandom.com/wiki/ArmCo_ammunition_construction_appliance?oldid=3268338"
Community content is available under CC-BY-SA unless otherwise noted.