Arlington utility is part of the Metro system under the Capital Wasteland.

The Arlington utility has collapsed from the continued deterioration over the years. It is an underground utility tunnel and hosts caves infested with raiders and mirelurks. It connects Arlington Cemetery North and the DCTA tunnel 014-B Potomac tunnel system.

U.S. Army: 30 Handy Flamethrower Recipes can be found on the second floor in the "kitchen area." Coming from DCTA tunnel 014-B Potomac, it's past the caves. When entered, the tunnels will be full of raiders. Take the first stairs on the right and it will be on a shelf. From the Arlington Cemetery entrance, after passing the "White Line" sign, take the first left (a four way junction), then a right (a T intersection). The kitchen area will be on the right.

Arlington utility appears only in Fallout 3. 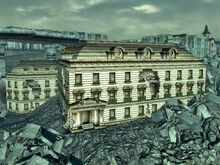