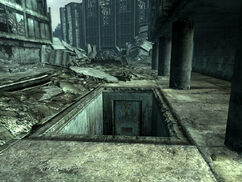 The Arlington sewer is an unmarked location in the Capital Wasteland in 2277.

The sewer is a small underground area located to the southeast of the Arlington Library and is divided into three levels, with two guardrooms and a locked storage room on the bottom level. The storage room can be accessed by a terminal and contains a safe, an armor crate, and two ammunition boxes. The sewer also contains several hostile raiders of varying levels.

Southwest of the sewer, there is a Talon Company outpost with a Stealth Boy and a Nikola Tesla and You book on a table, near a bunk bed on the top floor.

The Arlington sewer appears only in Fallout 3.

Unlocked basement space
Add an image to this gallery
Retrieved from "https://fallout.fandom.com/wiki/Arlington_sewer?oldid=3202706"
Community content is available under CC-BY-SA unless otherwise noted.