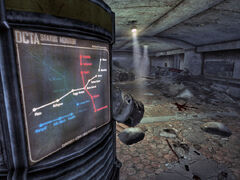 Arlington/Wasteland Metro and in the Pip-Boy as Flooded Metro, is a Blue Line Metro station located south of Wilhelm's Wharf.