“This is an entire library's archives. You know how valuable that is, right?”— The Lone Wanderer

The Arlington Library, officially the Library of Congress, is a mostly-intact public library building located in the Capital Wasteland in 2277. It is largely occupied by raiders, whose position is threatened by the Brotherhood of Steel soldiers in the front lobby.

Arlington Library is easily found by following the Potomac River south past the Citadel, then turning west to follow the road just south. It is directly across from Alexandria Arms and about two miles west-southwest of the Jefferson Memorial.

There is a Talon Company recon camp nearby, so be careful when approaching the library, as they are easily alerted to the Lone Wanderer's presence. Next to Alexandria Arms, there is a building that a single raider uses as their home and is covered with traps. In addition, an Enclave Vertibird may appear just outside of the raider's building and drop off troops.

When entering the library, one will immediately initiate dialogue with Scribe Yearling, a Brotherhood of Steel scribe who is tasked with archiving all pre-War knowledge into the Brotherhood's central computers. She will give the player character access to the library's computer terminal at the front desk, where they will be able to download the card catalog to complete a primary objective in the Wasteland Survival Guide quest. To complete the optional objective, the player character will have to explore further into the building until they find the library's mainframe computer buried deep within a raider den.

A couple of Brotherhood of Steel soldiers from Scribe Yearling's detachment found on the first floor near the back (at the entrance to the first room with raiders), will help the player character clear out the building. Upon approaching them, they will begin a scripted advance through the building, into the other wings, and will eventually finish up in a "final" room with two turrets, where, just before entering, they will be joined by a third Brotherhood soldier. This advance will clear almost all of the raiders in the library (with the player character's help; otherwise, they will most likely die before reaching the final room). Their path does not lead them into the room where the player character needs to go to achieve the optional objective of the Wasteland Survival Guide quest. Once they have cleared the room with the two turrets, they stand down and begin walking back to Scribe Yearling's position. 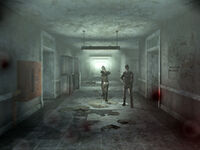 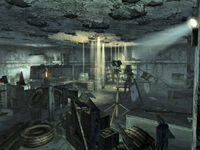