Arlington House is a medium sized house in the center of Arlington Cemetery.

After the Great War and with the subsequent abandonment of Washington D.C., Arlington House stood empty. It was not until the late 2270s that a raider by the name of Junders Plunkett claimed it as his own, to hide from the Regulators. Sheltering among the tombstones, Plunkett also cultivated a shrine to Abraham Lincoln, who is a mythical figure to him.[1]

Arlington House can be accessed from the cemetery, which in turn can be accessed from several metro tunnels in the surrounding area. In the basement, there is a shrine to Abraham Lincoln, complete with flowers and wine. Should one have the Lawbringer perk, Junders Plunkett will reside here. He commonly spends time in the basement, running upstairs to attack any intruders.

Arlington House appears only in Fallout 3. 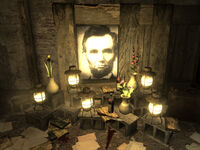