Arlington House in the center

Arlington Cemetery is most of what remains of the Arlington district, including Arlington National Cemetery in the Capital Wasteland.

To the south is Mama Dolce's food industry and in the center, there is the Arlington House. Before the bombs fell, many of the country's war heroes were buried beneath this soil. Now, it is an empty spot on the map, mostly devoid of life. The Arlington/Wasteland Metro, located south of Wilhelm's Wharf, opens to Arlington Cemetery.

After exiting from the Arlington/Wasteland Metro station, it is necessary to walk up a slight incline before being able to see the cemetery properly. To the west is Arlington House, which holds Junders Plunkett if the Lawbringer perk is active. At the end of the map area is Mama Dolce's, which contains several Chinese remnant soldiers.

Arlington Cemetery appears only in Fallout 3.

The cemetery features a jumbled collection of gray tombstones of varying shape, which draws a stark contrast with the real Arlington National Cemetery, which is mainly taken up by fields of highly ordered white tombstones of the same design. 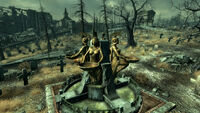 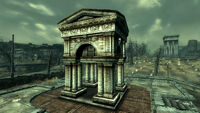 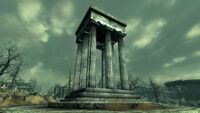 Arlington Cemetery in an endings slide
Add a photo to this gallery
Retrieved from "https://fallout.fandom.com/wiki/Arlington_Cemetery?oldid=3317420"
Community content is available under CC-BY-SA unless otherwise noted.