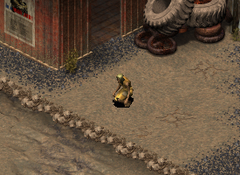 “I know you did your best, but couldn't the Brotherhood have sent anybody better?. The whole town is sorry. I had such high hopes for you.”

Arlene Turling is a citizen of Quincy in 2197.

Arlene Turling is a young woman in her early twenties. She was raised by Hillary Eastwood, the town's mayor, after her own parents died. Now she is the mayor's secretary, assistant, and the best friend of Evita Eastwood, the mayor's daughter. Arlene was tutored by Hillary and shares similar speaking traits. Both have good English and speak clearly.

When the town was invaded by the Beastlords, Arlene was the one to wait for the squad of Brotherhood of Steel. When they came, she informed them of the location of the mayor, and revealed that the key to the successful liberation of the town is deactivating the sirens.

Retrieved from "https://fallout.fandom.com/wiki/Arlene_Turling?oldid=3366420"
Community content is available under CC-BY-SA unless otherwise noted.