Arktos Pharma Company was a research and development corporation in the pre-War United States.

A bio-pharmaceutical research and development company, Arktos Pharma was testing a chemical formula under the designation "Project Beanstalk" before the Great War. The project was designed to test three Arktos-developed chemical compounds on crop yields, spanning 20 crop fields in total via modified Mr. Handies known as Pharmabots.[1] Although initially successful to some degree, issues with staffing and a significant accident halted further research.[2]

The large subterranean automated research facility was made up of three expansive laboratories. Each of these labs encompasses its own biomes, providing opportunities to perform experiments on a wide variety of organisms. Research continued despite the destruction on the surface, and the robots who resided within the depths continued to carry out the company’s directives, later gaining assistance from the Vault 76 Vault Dwellers.[3]

The company was responsible for the development of a solution that caused significant mutations in human beings.[4] One researcher, Natalie Ingesson became a ghoul as a result of participation in the research. The company entered into a government contract with the United States Space Administration to develop Project-Z, a serum derivation from Formula K, modified for Zero G efficiency in human subjects.[5]

Arktos means "bears" in Greek, which is reflected in the company's logo. 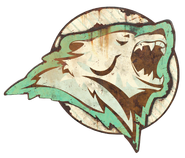 Seal of the company