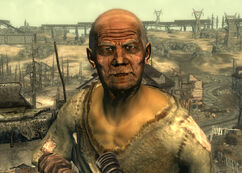 “Arkansas is that asshole holed up in that minefield. Killed a whole Paradise Falls crew.”— Grouse

Arkansas is an elderly, revenge-driven sniper, who lives in Minefield in 2277.

The last of the military survivors who made Minefield their town, Arkansas was a small boy when the slavers first came and captured nearly all of the tribe, but they never found him. Swearing revenge, he spread rumors of a new band of inhabitants and set a trap for the slavers. When the slavers came to raid the town again, they were harried by a hidden sniper and decimated by landmines. The slavers took heavy losses that day and never came back. Now an old man, Arkansas still shuffles around this place.[1]

Aside from targeting inanimate objects near the Lone Wanderer, he will fire - from his perch in a three-story building at the north end of town - upon the vehicles scattered about the area, causing them to explode, when the player character approaches.

Arkansas appears only in Fallout 3.

Minefield in G.E.C.K. - walking into red areas causes Arkansas to shoot cars, mines, or other objects if he is present (even if he is not hostile)
Add a photo to this gallery

Retrieved from "https://fallout.fandom.com/wiki/Arkansas?oldid=3443849"
Community content is available under CC-BY-SA unless otherwise noted.