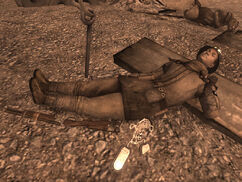 “The killing of profligates should never go unrewarded. I'll pay you a small sum per tag.”— Aurelius of Phoenix

Arizona Scavenger[1] is an unmarked quest in Fallout: New Vegas.

After speaking with Aurelius of Phoenix, he offers the character a bounty on the lives of NCR soldiers. For proof, Aurelius will require NCR dogtags to be brought to him. With a Barter skill of 35, the cap reward can be changed to ammunition and/or supplies. To inquire about the ammunition and/or supplies, you will have to see Decanus Severus. To easily find NCR dogtags, it is best to head to areas with a high NCR population. These areas include Camp McCarran, Camp Forlorn Hope, Camp Golf, Hoover Dam and Mojave Outpost. Locate Aurelius of Phoenix and turn in the dogtags, you will be paid in caps for every dogtag you turn in; if you succeed at the Barter check, Decanus Severus will trade NCR dogtags in varying amounts in exchange for certain items and differing amounts of Legion fame (see bugs).

Aurelius of Phoenix rewards you with 10 caps per dog tag, plus the fame rewards below:

When responding, "Here, take all the dog tags I've got":

Retrieved from "https://fallout.fandom.com/wiki/Arizona_Scavenger?oldid=3150455"
Community content is available under CC-BY-SA unless otherwise noted.