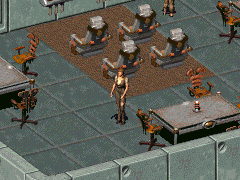 “My husband recently died. I miss him and I'm having problems adjusting. That's all.”

Ariel is a short, slender woman who wears a blue sundress.[1] Ariel was traveling with her husband, Rand, on a caravan to the NCR when they were attacked by a band of raiders, during which he was killed protecting her. Before she could be killed, she was saved by a pack of talking deathclaws. The deathclaws brought her and her daughter Sandy to Vault 13 where she has remained, as she feels much safer within the confines of the vault than in the wasteland.

Like all of the other residents, Ariel will be killed by the Enclave unless the Restoration Patch is installed and Dr. Schreber is killed within two weeks of entering Vault 13.

Ariel appears only in Fallout 2.

Retrieved from "https://fallout.fandom.com/wiki/Ariel?oldid=3188967"
Community content is available under CC-BY-SA unless otherwise noted.