10h
“Grandpa wants to play Pirates, but he needs a Parrot first.”

A simple quest that involves clearing out the area of pirate-themed enemies in order to find a parrot. Once the parrot has been found and collected, the player's dwellers can return home. The quest takes place in a random vault.

The top floor has a group of five raiders and a group of three raiders. The next floor down has three groups of five raiders in all three rooms. The third floor contains the raider leader accompanied by four raiders. Defeat them to receive the parrot pet. There is also a random rare weapon and random rare outfit in the room. Everything from here on is optional. 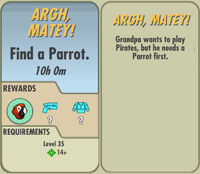