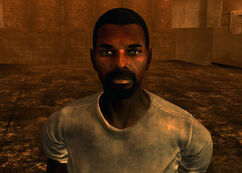 Commentator in the arena

“They're savage! They're brutal! They're here to keep this worker in his place -- the undefeated Bear Brothers! Let's find out if the newcomer can hold his own against real fighters! Release! Fight!”

The arena announcer is a character in the Fallout 3 add-on The Pitt.

The arena announcer is a pitt raider in The Mill who commentates on fights that occur in the The Hole.

He will make comments from outside the arena during the Lone Wanderer's fight in the arena. After this, he will disappear from the game.

Due to his position outside the arena, it is impossible to view his physical appearance, but he will show up on the Lone Wanderer's compass as friendly.

The arena announcer appears only in the Fallout 3 add-on The Pitt.

The arena announcer's dialogue (particularly the closing line about the player character earning their victory) is very similar to the style of delivery used by the announcer at the Imperial Arena in The Elder Scrolls IV: Oblivion, another Bethesda Softworks game.

Retrieved from "https://fallout.fandom.com/wiki/Arena_announcer?oldid=3081486"
Community content is available under CC-BY-SA unless otherwise noted.