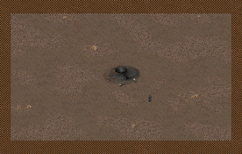 The Alien Ship, a special encounter in the original Fallout where the only in-game reference to Area 51 can be found.

“Property of Area 51, return if found”— Written on the Alien Ship

Area 51 is a military base in Nevada, and a former testing ground for experimental government aircraft and extraterrestrial phenomena. Area 51 housed some alien technology, including a captured flying saucer which was later re-captured by aliens, but then crashed somewhere in California.

Area 51 is mentioned in Fallout, as a print on a flying saucer in the Alien Ship special encounter. It was to appear as a location in Fallout 2 and be inhabited by a group of scientists, but was cut from the final version of the game.[1]

Retrieved from "https://fallout.fandom.com/wiki/Area_51?oldid=3338581"
Community content is available under CC-BY-SA unless otherwise noted.