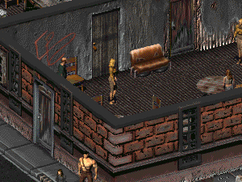 “Have you found my boy yet? I don't know how long he can last out there on his own.”

Ardin Buckner is the head of the Buckner family in 2241.

Ardin is a very fit and vivacious woman in her early fifties.[1] She is the strong-willed woman in charge of the Buckner family of Klamath. She runs a combined bar, hostel and shop, the Buckner House, in addition to a brahmin herd, which are the sources of her income. She is friends with many of the town's residents, including Whiskey Bob, who always seems to have some hooch available.

She has two children - Maida and Torr Buckner, who help her in running the business, one with her refined merchant's sense and the other with sheer physical prowess (despite his rather limited intellectual aptitude) - and was looking to form a permanent relationship with Smiley the Trapper, but before she could finalize it, he went missing in the toxic caves.

Originally, the Chosen One was to be able to expose the Dunton rustling scheme, but it was cut before release.

Ardin Buckner appears only in Fallout 2.

Retrieved from "https://fallout.fandom.com/wiki/Ardin_Buckner?oldid=3072947"
Community content is available under CC-BY-SA unless otherwise noted.