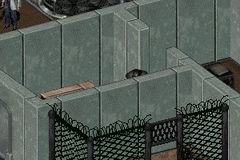 Dornan in the drill sergeant's quarters.

“If I like you, you can call me Sarge. But guess what? I don't like you! Do you understand?”

Sergeant Arch Dornan is an Enclave non-commissioned officer who is stationed at Navarro's airbase in 2241.

Arch Dornan is a drill sergeant in the Navarro base. Equipped with advanced power armor and a characteristically bad attitude. Both his demeanor and his voice, are reminiscent of various drill sergeant stereotypes, and as such, he is the bane of privates, chastising them for even the smallest infractions and breaches of protocol, especially if he dislikes them. Not much is known about his past life.

Arch Dornan appears only in Fallout 2, however, Cannibal Johnson in Fallout: New Vegas makes a reference to Dornan, remembering him for once catching a private out of uniform and going on the most "ear-blistering rant known to man."[1][2][3]

Dornan's attitude and many of his lines and expressions are noticeably similar to those of Drill Instructor Hartman from the 1987 film Full Metal Jacket.

Like the Navarro base commander, Arch Dornan uses a female proto id, but is referred to as a male in dialogue.

Welcome to Camp Navarro... a civilian! How in the hell did a civilian get on this base? I'll have someone's ass for dinner! Get this civilian off government property!

Outstanding. Proceed on the double to the hangar where you will stand guard duty. You will do a fine job. Do you understand?

If I like you, you can call me Sarge. But guess what? I don't like you! Do you understand?