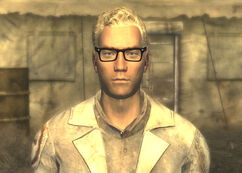 “I'm really very boring. You'd get better stories out of a Freeside junkie.”

Arcade Israel Gannon is a possible companion in Fallout: New Vegas. As a member of the Followers of the Apocalypse in 2281, he researches the potential medicinal uses of naturally occurring compounds for the chapter that resides in Freeside's Old Mormon Fort.

Arcade Gannon is the son of an Enclave officer, born in Navarro in 2246, four years after the destruction of the Poseidon Oil Rig. His father died while Arcade was still an infant, killed in combat on an away mission. To this day, the specifics of his father's death are unknown to him. As he grew up, he bonded closely with his mother and his de facto family, the Enclave remnants, a group that had formerly served in the same unit as his father. In the wake of the NCR's capture of Navarro, the group fled the area and attempted to integrate into civilian life, but this was short-lived. Between the Republic and the Brotherhood of Steel, both launching aggressive campaigns to track down all personnel that hadn't already been killed or detained during the siege, the Remnants were forced to retreat further into the eastern territories.

They eventually settled in the Mojave Wasteland and started new lives, their past associations kept secret for fear of further reprisals and persecution. Gannon joined the Followers of the Apocalypse to find a peaceful application for his skills in medicine and began working in Freeside. Though he's attempted to put the past behind him, he continues to dwell on the shared experiences of his family and his father's old unit, hoping that some day he can repay the Remnants for their unwavering loyalty to both him and his mother. Arcade trained as a doctor with the Followers in the NCR. He prefers research to healing because he's “not good with people.” In his spare time he enjoys reading "pre-War books about failed socioeconomic theories." Gannon speaks fluent Latin, although he is quick to assure the Courier that it was not a skill he picked up from Caesar's Legion, whom he detests.

Arcade is highly intelligent, personable, and quick-witted. He sports a strong self-deprecating sense of humor, which he frequently uses to deflect questions of a personal nature. However, a Courier with the Confirmed Bachelor perk can flirt with him to discover that he's homosexual.[1]

He shares the idealism of the Followers, but he also tries to be more pragmatic than some of his colleagues. He understands the post-apocalyptic world is one in which, sometimes, people just have to be shot in the head.

He has a deep-seated desire to affect society on a broad spectrum, but he is only too familiar with what can happen when ideals become more important than the needs of individuals. This has led him to take a more balanced approach to the troubles of the post-war landscape, taking up the Followers' cause to help those around him achieve independence, assisting in the effort to make the less fortunate communities become more self-reliant. Though he may concede that the NCR's motives are in some ways similar, it's likely that he sees their 'clean up' efforts as distressingly corollary to what he offhandedly describes as the 'fascist' tactics of the Enclave.

Despite doing a great deal of good for people in Freeside, he still worries about whether or not the path he's taken is one his father could be proud of.

Forced to conceal his past for fear of NCR persecution, he has a desire for companionship from someone he knows he can trust. While he admits to having had many men in his life, he says "lovers make poor confidantes." The only people he remains close to are the Enclave remnants, whom he sees as an extended family, though they've grown distant from each other over the years. His closest bond is with Daisy Whitman, who he describes as being "the only woman in his life" after the death of his mother.

Arcade will get fed up with the Courier if they do or say things that he dislikes. He has an internal counter of "dislike" points that is increased by doing or saying stupid or mean things or doing things that hurt the Followers. Once he has accumulated 3 "dislike" points, he will warn the Courier that [s/he] is "acting crazy." Most of these possible "dislike" points may be obtained during The White Wash quest. At 6 points, he will leave permanently. Note that he also tracks "like" points, but those are only used to decide if he will start the For Auld Lang Syne quest early or not.

* Only worn if fighting at Hoover Dam.

**Because Arcade's Plasma Defender uses magical companion ammo instead of energy cells, it does not have the -2 DT effect that comes from using standard energy ammunition. Otherwise, the weapon has the same statistics as the standard version.

Arcade Gannon appears only in Fallout: New Vegas, but was going to appear in Van Buren, the canceled Fallout 3 by Black Isle Studios (see Arcade Gannon)

“Arcade's conflict is about his identity. He is torn between a sense of loyalty and tradition to his father and adoptive family and a desire to be independent, self-made. He feels caught between generations and cultures and isn't sure who he should be or how, if at all, to use the "legacy" (material and otherwise) left to him by his father.

Arcade's endings are intended to reflect that no one is damaged more by reality than the idealist. He does his best to be practical and rational, but there is a strong idealist streak in him/the Followers in general. In some of Arcade's "best" endings (meaning, the circumstances he thought he wanted), he is still somewhat disappointed by how things turned out. In his "worst" endings, he can wind up bitterly disillusioned, brutally murdered, crucified, casually executed and discarded in a ditch, or even defiantly suicidal.

Arguably the worst ending is the one in which Arcade is given to Caesar as an enslaved doctor. The existence is so unbearable to him that he does what the historical Cato the Younger did at Utica: rather than give Caesar satisfaction, he disembowels himself. Like Cato, Arcade cannot live in a world where everything he tried to resist has come to pass.”— J.E. Sawyer on Formspring

Retrieved from "https://fallout.fandom.com/wiki/Arcade_Gannon?oldid=2338407"
Community content is available under CC-BY-SA unless otherwise noted.