Follower of the Apocalypse Doctor:

ArcadeClass (Follower of the Apocalypse Doctor) 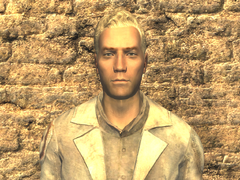 Arcade without his glasses

“I'm really very boring. You'd get better stories out of a Freeside junkie.”

Arcade Israel Gannon[1] (born 2246)[1] is a member of the Followers of the Apocalypse and possible companion in 2281.

Arcade is currently researching the potential medicinal uses of naturally occurring compounds in the Mojave Wasteland for the chapter residing in Freeside's Old Mormon Fort. Research into the project is slow going, as Arcade considers many of the avenues "fantastic improbabilities" but is enthusiastic about helping people regardless.[2] However, if someone were to come to him with a more pressing issue, he would step away from his research to help with more pressing matters.

Arcade Gannon is the son of an Enclave officer,[3] born in Navarro in 2246,[4][5] four years after the destruction of Control Station Enclave.[4] His father died while Arcade was still an infant, killed in combat on an away mission; to this day, the specifics of his father's death are unknown to him.[6] As he grew up, he bonded closely with his mother and his surrogate family, the Enclave remnants, a group that had formerly served in the same unit as his father. In the wake of the NCR's sacking of Navarro, the group fled the area and attempted to integrate into civilian life, but this was short-lived. Between the Republic and the Brotherhood of Steel both launching aggressive campaigns to track down all personnel that had not already been killed or detained during the siege, the Remnants were forced to retreat further into the eastern territories.

They eventually settled in the Mojave Wasteland and started new lives, their past associations kept secret for fear of further reprisals. Gannon joined the Followers of the Apocalypse to find a peaceful application for his skills and began working in Freeside. Though he's attempted to put the past behind him, he continues to dwell on the shared experiences of his family and his father's old unit, hoping that someday he can repay the Remnants for their unwavering loyalty to both him and his mother. Gannon trained as a doctor with the Followers in the NCR.[7] He prefers research to healing because he is "not good with people."[8][9] In his spare time he reads "Pre-War books about failed socioeconomic policies".[4] Gannon speaks fluent Latin, although he is quick to assure the Courier that it was not a skill he picked up from Caesar's Legion.[10]

Arcade is highly intelligent, personable, and quick-witted. He sports a strong self-deprecating sense of humor, which he frequently uses to deflect questions of a personal nature. He shares the idealism of the Followers, but he also tries to be more pragmatic than some of his colleagues. He understands the post-apocalyptic world is one in which sometimes people just have to be killed, but if something is failing it will fail on its own.[11]

He has a deep-seated desire to effect societal change on a broad spectrum, but he is only too familiar with what can happen when ideals become more important than the needs of individuals. This has led him to take a more balanced approach to the troubles of the post-war landscape, taking up the Followers' cause to help those around him achieve independence, assisting in the effort to make the less fortunate communities become more self-reliant. Though he may concede that the NCR's motives are in some ways similar, it's likely that he sees their 'clean up' efforts as distressingly corollary to what he offhandedly describes as the 'fascist' tactics of the Enclave.[12]

Arcade is strongly averse to groups he views as fascist and imperialist, such as the New California Republic and especially Caesar's Legion.[13][14] Arcade feelings on Caesar's Legion are by far the strongest, viewing Caesar as a regressive megalomanic that's re-creating the past instead of creating anything new.[15]

Forced to conceal his past for fear of NCR persecution, he has a desire for companionship from someone he knows he can trust. While he admits to having had many men in his life, he says "lovers make poor confidantes."[16]

Arcade's mother has recently died,[16] so the only people he remains close to are the Enclave remnants, whom he sees as an extended family, though they've grown distant from each other over the years. His closest bond is with Daisy Whitman, who he describes as being "the only woman in his life" after the death of his mother.[16] His other experiences with the remnants vary. Memories of Judah Kreger are of him keeping the remnants together, an astonishing feat considering Cannibal Johnson and Orion Moreno's hostility, and how Kreger was always kind and welcoming to him but never getting too close. Arcade believe it was more of a sense of loyalty to his father.[17] Arcade's memories of the other members are weak, but of Moreno, he remembers his unwavering loyalty to the Enclave,[18] and of Cannibal Johnson he remembers his subversion of orders and him praising his father entirely and further comparing Arcade to him.[19]

By far the most affecting memories Arcade has are of his father. From the praise he's heard from all members of the remnants, he feels conflicted about his lot in life and how well he's lived up to the example his father set. Despite doing a great deal of good for people in Freeside, he still worries about whether or not the path he's taken is one his father could be proud of.[20] Arcade still keeps his father's personal suit of power armor, should the need arise for it,[21] but is at a crossroads between following his father's footsteps with the remnants or forging his own path he's personally proud of.[22]

“Arcade's conflict is about his identity. He is torn between a sense of loyalty and tradition to his father and adoptive family and a desire to be independent, self-made. He feels caught between generations and cultures and isn't sure who he should be or how, if at all, to use the "legacy" (material and otherwise) left to him by his father.

Arcade's endings are intended to reflect that no one is damaged more by reality than the idealist. He does his best to be practical and rational, but there is a strong idealist streak in him/the Followers in general. In some of Arcade's "best" endings (meaning, the circumstances he thought he wanted), he is still somewhat disappointed by how things turned out. In his "worst" endings, he can wind up bitterly disillusioned, brutally murdered, crucified, casually executed and discarded in a ditch, or even defiantly suicidal.

Arguably the worst ending is the one in which Arcade is given to Caesar as an enslaved doctor. The existence is so unbearable to him that he does what the historical Cato the Younger did at Utica: rather than give Caesar satisfaction, he disembowels himself. Like Cato, Arcade cannot live in a world where everything he tried to resist has come to pass.”— Joshua Sawyer on Formspring
“Hey, sorry if this has been asked before, but I had a question about Arcade Gannon, specifically the ending where he’s sold to Caesar. Why doesn’t he kill him during the surgery, or even refuse to do the operation so Caesar might die of his tumor? Sure, he’d probably be crucified for either of these things, but given that he’s willing to disembowel himself later on I would have assumed he would have been willing to die in order to strike a blow against the legion, especially since slavery is the only thing to look forward to if he lives.

Arcade is an idealist, so I did not think that he would do harm in his capacity as a doctor, nor would he refuse to provide medical aid even to a mortal enemy. Yes, Arcade will follow you around and blast everything in the Mojave Wasteland with his plasma defender, but the circumstances of gameplay are different from when he’s put in the position of providing (or not) medical aid.

Arcade is not a pragmatic person, so in the circumstances where he becomes a long-term instrument of Caesar (post-endgame), he disembowels himself rather than living as a tool of evil (in his mind). His suicide is intended to mirror the death of one of the most notable idealists of the Roman Republic, Cato the Younger.

His name is also intended to reflect his idealism. At a certain point in time, the region of Arcadia became associated with an idyllic state of being, later utilized in the memento mori Et in Arcadia ego.”— Joshua Sawyer on Tumblr

Retrieved from "https://fallout.fandom.com/wiki/Arcade_Gannon?oldid=3536106"
Community content is available under CC-BY-SA unless otherwise noted.