Fallout 4
“In the years before the war, ArcJet Systems was a successful military and civilian aerospace contractor, specializing in communications and propulsion systems.”— Fallout 4 loading screens

ArcJet Systems is a location in the Commonwealth in 2287.

In 2075, ArcJet began working on a nuclear-powered rocket, the XMB booster engine, in hopes of convincing the United States Space Administration to award them a lucrative contract for the government's Mars Shot Project.[2] Despite the risk of starting work before receiving the contract, the gamble paid off when the USSA awarded ArcJet both the contract for the booster engine and the related contract for a deep range transmitter. CEO Thomas Reinhardt promised the USSA both projects would be finished by July 2077, a year before the expected Mars project launch date.

Eager to deliver on ArcJet's first federal contract, Reinhardt hired Dr. Rory McClellan, a private military contractor, to lead the development of the XMB booster engine. Reinhardt also ordered his head of security, Sam Brent, to double the facility's security and install automated security systems.[3] By December 2075, both contracts were on schedule and under budget, and the USSA was considering the possibility of awarding ArcJet with additional future projects.[4]

In February 2076, the XMB suffered a setback when it was discovered that it was hundreds of tons over the weight allowance required by the USSA,[5] setting the project potentially three to six months behind schedule.[5] Reinhardt also became increasingly paranoid about security, and had turrets installed in the office areas and required all staff to wear special identification badges or risk being fired upon.[6] In July, the USSA announced the Mars Shot Project to the public, resulting in increased media coverage of ArcJet, causing Reinhardt to lie about the engine's progress.[7] In November, McClellan was able to fix the engine's weight issue, allowing ArcJet to complete its initial development.[8]

By 2077, ArcJet was able to finish the deep range transmitter project, allowing the company to receive the proceeds from the contract. In February 2077, ArcJet planned to hold a press event to show off the first USSA test of the XMB booster engine.[9] However, a reporter somehow managed to sneak into the core engine room before the event, and was accidentally vaporized during an engine test. The press event was canceled, and Reinhardt ordered Brent to cover up the death to prevent the company from losing the contract.[9] By September, the USSA warned Reinhardt that they may have to delay the Mars Shot Project due to intensifying military conflicts overseas.[10]

In October, McClellan discovered the cover-up of the dead reporter and told Reinhardt he was going to inform the police. Reinhardt responded by threatening to kill McClellan and his family if he told anyone. Despite this, McClellan still planned to take the video evidence to the press.[11]

The layout of the building differs depending on whether or not the quest Call to Arms has been started. Before starting the quest by speaking to Paladin Danse, the building will only consist of the main lobby and the second-floor corridor and rooms, with further progress blocked by a broken door in the northeast corner of the lobby and an impassable section of upturned flooring at the southeast end of the upstairs corridor. After starting the quest, the lobby stairs to the second-floor corridor will have collapsed, but the doorway in the northeast corner will be open, allowing access to the entire facility. Before the quest, only Protectrons and turrets will be present in the accessible areas, while during the quest, the facility will be infested by synths.

The upper floors of the building have suffered massive internal damage, forming a maze of collapsed floors and ceilings. This area consists of the main lobby, offices, restrooms, and data storage.

With the quest active, follow Paladin Danse through the northeast corner door in the main lobby to the wrecked security room containing the security terminal. Through another room is the lab control room, which contains the lab analyst's terminal and the Advanced-locked lab control terminal that may be used to open the sealed security door to the south. Through the door is a small mechanical room, with a hole in the western wall leading to a two-level lobby defended by two ceiling turrets and a few synths. On the upper level, the western room contains the Expert-locked lab terminal, an Expert-locked safe, and a chemistry station. The southern room contains an armor workbench and a weapons workbench. Finally, the eastern room descends via a collapsed floor ramp to the same room on the lower level, bypassing the nearby Novice-locked door and leading to a stairway up to the office area.

The office area is first accessed through the CEO's office, which includes the CEO's terminal and an Advanced-locked wall safe. Outside the office is a corridor defended by four ceiling turrets, with several rooms along its length. Just east of the CEO's office is a collapsed floor ramp leading down to a Novice-locked safe. Just west of the office is the repair department with its Novice-locked terminal, which can be used to deactivate the turrets. The other rooms along the corridor heading north and west include a small communal office, a conference room, a pair of restrooms, and a storage closet. A balcony overlooking the main lobby just north of the storage closet may only be accessed before Call to Arms. A nearby collapsed floor ramp descends to the first floor, giving access to a small office looking out to the main lobby and containing the Novice-locked receptionist's terminal and an Advanced-locked floor safe. Stairs to the east lead down to the ArcJet engine core.

A corridor leads to the cavernous multi-level rocket engine test chamber, with the XMB booster engine suspended from the ceiling. A careful jump from the railing of the collapsed stairway immediately to the left of the entrance to the chamber allows access to an upper room on the northern wall marked with a "2" sign containing the Expert-locked project manager's terminal and an Advanced-locked safe. Another area reached by another skillful jump farther up on the eastern wall of the chamber and also marked with a "2" contains a skeleton with minor loot in a collapsed stairwell. Alternatively, these two areas can be more easily accessed by jumping down from the higher stairs after powering and using the elevator.

At the bottom of the chamber and through a short utility tunnel to the west is the engine start room, which includes a console with a button that may be used after auxiliary power is restored; this can be done by using the Novice-locked facilities terminal in the small room to the south to start the auxiliary generators. Pressing the engine start button will then fire the engine, causing its intense flames to turn all synths inside the test chamber into piles of ash (Paladin Danse will be safe in his power armor). This can only be done once, and cannot be repeated.

After restoring power, the elevator on the southern wall may be used to access the top level of the test chamber, where the main engine control room, the engine core control terminal, a steamer trunk, and several hostile synths are found. Here the deep range transmitter may be retrieved and a second elevator may be used to return to the surface. The elevator will exit in the small bunker just north of the main building.

ArcJet Systems only appears in Fallout 4.

ArcJet may share its name with the real-world Arcjet rocket.

Stingray Deluxe on display south of the building 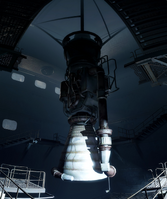 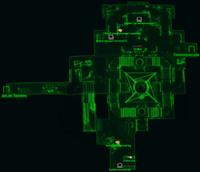 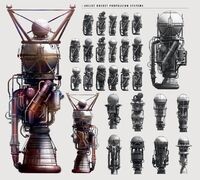