Aradesh is the leader of Shady Sands in 2161.

Aradesh has been leader of Shady Sands since its founding in 2142. He is also the father of Tandi, the founder and first president of the New California Republic. Aradesh is a good man who is genuinely concerned about his people and their problems. He may be a bit suspicious of the Vault Dweller at first and can seem a bit paranoid, but that's because he distrusts all outsiders. It is possible to earn his trust.[Non-canon 1]

Aradesh was originally a Vault 15 dweller, a sister vault of Vault 13. His accent and appearance are attributed to living in Vault 15, which housed the social experiment of incorporating people of diverse cultural backgrounds. However, Aradesh left the vault with the other dwellers following a disastrous attack by raiders. Along with a few other exiled inhabitants of the vault, he ventured out into the wastes, looking for a place to begin anew.

Soon after the attack, Aradesh founded the humble community of Shady Sands using a G.E.C.K. in 2142. He then led the community with a steady, guiding hand, reinforcing the slightly xenophobic attitudes of the townsfolk, aiming to make it a completely self-sufficient community, and keep it that way. Initially, he greeted the Vault Dweller with reserve, but after they removed the radscorpion threat and later saved his daughter from the Khans, he welcomed them openly in the community. Broad horizons were opening up for the small town.

Aradesh (along with Seth and Tandi), would later start laying the foundations for the New California Republic, with him being elected as its first president.[1] Soon after, inspired by the Vault Dweller's legacy, Aradesh and Seth began searching for Vault 13. However, during one of their expeditions, they disappeared and were proclaimed dead. Afterward, his daughter took her father's position of president, following in his footsteps to guide the NCR to a brighter, safer future.

Aradesh appears in Fallout as a talking head. He is mentioned by Tandi in Fallout 2, and appears on the NCR five dollar bill. He is also mentioned by Caesar in Fallout: New Vegas and in Fallout 4 on the radio broadcast while exploring Conrad Kellogg's memories.

"Wanderer, I shall believe you . . . for now. You may enter Shady Sands, but be warned your every move will be watched."

"As Dharma said, 'Caution is life in troubled times.' Your origin is not the issue. Your intent is."

"We are a very protective community. As Dharma said, 'Many sticks can be broken. A bundle cannot." 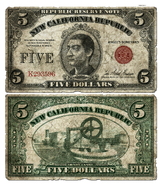 Aradesh on the 5 dollar bill