You no longer take Rad damage from swimming and can breathe underwater. 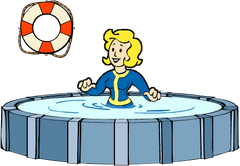 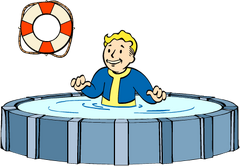 “Water is your ally.”

Aquaboy/Aquagirl is a perk in Fallout 4 and Fallout 76.

“Water is your ally. The Commonwealth has an impressive amount of it. Whether you're swimming the lakes or exploring the depths of the ocean, having the ability to use stealth and not suffer any ill effects from water is a most impressive feat indeed. It allows escape in any direction and sneak attacks on shoreline strongholds.”— Fallout 4 Vault Dweller's Survival Guide description

Aquaboy/Aquagirl is a perk in the Nuclear Winter battle royale mode. It requires 3 SPECIAL points to equip.

Neither the Aquaboy/Aquagirl nor Lead Belly perks prevent radiation damage when collecting dirty water from a river or a water pump.

Fallout 76 perk image
Add a photo to this gallery
Retrieved from "https://fallout.fandom.com/wiki/Aquaboy/Aquagirl?oldid=3429285"
Community content is available under CC-BY-SA unless otherwise noted.