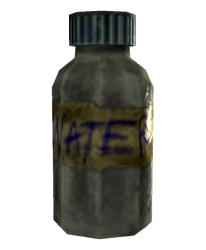 Griffon also tries to increase his profits on the water by telling the ghouls it has effects that will benefit them (which it does, because radiation heals ghouls, but it also furthers their "ghoulification".)

Selling quack cures with Latin-sounding names and accompanied by a sense of showmanship was a hallmark of the "Patent Medicine" era in the US, as exemplified by the medicine show, common in the 19th-century before passage of legislation banning them.

Retrieved from "https://fallout.fandom.com/wiki/Aqua_Cura?oldid=2301999"
Community content is available under CC-BY-SA unless otherwise noted.