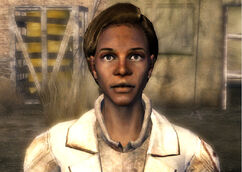 Interestingly, although she harshly criticizes the Brotherhood of Steel for potentially using ED-E for weapons research, she doesn't hesitate to explain that she will upgrade ED-E's weapons system. The bonus ED-E gains increases his weapon's power output.

Retrieved from "https://fallout.fandom.com/wiki/April_Martimer?oldid=2247029"
Community content is available under CC-BY-SA unless otherwise noted.