The Appalachian monorail is a public transportation system stretching across the Appalachian region, operational before the Great War.

Advertised as the "futuristic Watoga monorail," the regional system was used to entice potential residents with promises of a new, convenient transportation option.[1] Touted as the "fastest mass transit system in Appalachia," the monorail was described as providing citizens the flexibility to live in Watoga while commuting elsewhere,[1] giving the citizens an alternative to other methods of transportation.[2] Customers were guaranteed to reach any station within 15 minutes, or receive a refund in the form of non-transferable tokens for future travel.[3]

Predominant modes of infrastructure along the monorail included a long cross-regional line, consisting of an above-ground elevated railway network track of eyelet supports. It featured several stops branching from the Watogan transit hub, promoted with unique attractions ranging from the observation deck of Appalachia's highest peak of Spruce Knob, advanced technology of the monorail elevator, effortlessly swinging patrons up hundreds of feet, and access to camping amenities.[4] Several stops also provided opportunities for tours of locations such as the underground Garrahan Mining HQ and the "world-famous robotics factory" at the RobCo Research Center, of which holders of the yearly monorail pass were provided discounts.[5] More stations were planned for the future.[1]

The convenience and speed in which the monorail was advertised to travel also served as a potential danger, with transit hub staff warning of potential collisions due to the number of monorail cars in operation.[6] In an attempt to accommodate the increased number, the staff described the necessity of reducing stopping distances to a minimum.[6] This adjustment increased the risk of a major, multi-car collision, requiring only one car's brakes not to fail but merely underperform to cause a significant accident.[6]

Several company logos appear on the front of the train cars, including Atomic Mining Services and RobCo Industries. Non-stop access was offered to the research center of the latter, described as "the number 1 employer of Watoga residents," but multiple proposals to complement the monorail with additional bus services were declined by residents of the city.[5][7] The citizens stated they refused to "degrade themselves" by utilizing this form of travel and noted concerns of additional buses, featuring lower cost and improved capacity, bringing "the wrong kinds of people" to the area.[7]

The system operated through the Watoga Transit Hub, running east to west across the bottom half of the region, extending from Bramwell to the Cranberry Bog area.[8][9] Having since fallen into disrepair since the Great War of 2077, many sections of monorail stations and the cars themselves have been turned into makeshift homes, laboratories (such as Pylon V-13), and bases along the tracks.

In 2103, Foundation repurposed a section of the monorail to allocate a number of wind generators, while they used the Spruce Knob station as an extension of their settlement. 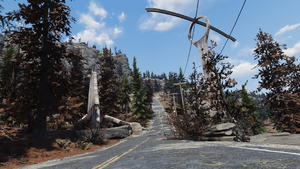 The Appalachian monorail line stretches from the RobCo Research Center in the eastern Cranberry Bog, to the Garrahan Mining Headquarters in the western Bramwell, connecting the two via stations numbered 01-05.[10] On the western end, Bramwell's station 05 at the Garrahan Mining Headquarters begins eastward, running parallel to State Route 93 along the cliffside in front of the scenic overlook. Progressing to the middle of the map, the line skirts Site Charlie, intersecting the railroad line at R&G Processing Services, passing over State Route 101 and 102 before veering northeast, passing Mountainside Bed & Breakfast and circling around Spruce Knob.

The Spruce Knob station featured a newly refurbished observation deck for viewing the surrounding region from West Virginia's highest elevation.[4] After the war, the location has been resettled, known as Foundation. Here, the tall eyelets are utilized by the settlers to hold large industrial fans. The monorail car here is now outfitted as housing, connected to the platform of station 04.

The monorail line then heads due south, curving around the South Mountain lookout before approaching the mountains. Circumventing the sheer cliff, the advanced technology of the monorail elevator served as an access point and maintenance dock to traverse the landscape, swinging the monorail cars up hundreds of feet to continue along the line on the other side of the mountain.[4][11]

Once passed the elevator, the monorail line progresses along the flat marshlands toward Watoga, skirting Fort Defiance and Appalachian Antiques to the south before bridging State Route 107, reaching station 03 in the heart of the town, and station 02 towards the eastern edge connected to the Watoga Transit Hub via skybridge.[12][13] The line continues northeast, parallel with Highway 65 until reaching Drop site C2. Shortly thereafter, Pylon V-13 sits along the track, the train car of which was transformed into a now-abandoned research lab. Several train cars are south of the makeshift research structure, having been thrown far from the tracks, laying on and under the ground. These wrecks are now fortified by super mutants. On the easternmost end of the monorail line, station 01 is situated at RobCo Research Center.

The Appalachian monorail appears in Fallout 76.

Beginning (or ending) at Garrahan

Time to start the journey

Looking back at station 5

Getting close to scenic overlook

Looking eastbound below the scenic overlook

Looking westbound back at Garrahan

Inside the front of the Foundation car

An exterior at Foundation

Atop the line nearing the monorail elevator

Last structure before the monorail elevator

Train within the elevator

Train within the elevator

Looking up at pylon V-13

Off the main rail

Fortress in a fallen train car

Broken pieces of the rail line

Time to head to the research center

End (or beginning) of the monorail line

In the background of Steel Dawn promo