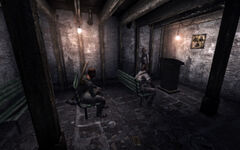 The monastery in Springvale

“Ours is a modest order, but our ranks are growing slowly, as other hear our words and are Enlightened.”— Brother Gerard

The Apostles of the Eternal Light are a religious faction based in the ruins of Springvale and led by Mother Curie III.

The Apostles of the Eternal Light were founded in 2277 by Mother Curie III, a former devotee of the Church of the Children of Atom. Unlike the Children however, the Apostles actively irradiate themselves. Brother Gerard guards the surface access to their Holy Light Monastery.

The Apostles of Eternal Light believe that ghouls are the next stage in human evolution and that we "should not resist the idea." They use radiation traps to turn themselves into ghouls. Unlike the church in Megaton, this church is against the great division and thus is opposed to blowing up the Megaton bomb.

The Lone Wanderer will learn of the cult after seeing a holy water pamphlet on the door of their house in Megaton, by asking a few of Megaton's inhabitants, or by talking to Brother Gerard. After a deal is made with them or they are killed, the pamphlet will still appear on the house door.

The Apostles of the Eternal Light appear only in the Fallout 3 add-on Broken Steel.

Retrieved from "https://fallout.fandom.com/wiki/Apostles_of_the_Eternal_Light?oldid=3530929"
Community content is available under CC-BY-SA unless otherwise noted.