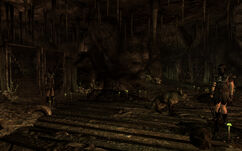 “My squad was ambushed by a Legion party led by that bastard Alexus. He was taking us into the mine up ahead, but I managed to get away. I need help to get them out.”— Renolds

Anywhere I Wander is a side quest in Fallout: New Vegas.

On the road between Nelson and Techatticup Mine, the Courier will be approached by a NCR trooper Private Renolds. He explains that his squad was ambushed by Caesar's Legion and taken captive in the mine farther down the road. Renolds was able to escape but two of his fellow troopers remain in captivity. He states that "bastard Alexus" is responsible for the ambush. One may accept the quest, garnering caps if a 45 Barter check is passed.

When approaching the mine, one will encounter two Legion recruits who patrol the area around the entrance. Depending on one's reputation with the faction, one can proceed into the mine with or without engaging the recruits, progressing through the mine to the cages where the troopers are held.

The storage key that unlocks the cages is held by Decanus Alexus, who can be pickpocketed or killed to retrieve it. One can also pick the locks to the cells and in either case, untie the prisoners. Return to Private Renolds to inform him of one's success to complete the quest.

The title of the quest may be based on the 1951 Frank Loesser novel Anywhere I Wander.

Retrieved from "https://fallout.fandom.com/wiki/Anywhere_I_Wander?oldid=3408282"
Community content is available under CC-BY-SA unless otherwise noted.