Vince Giordano and his Nighthawks 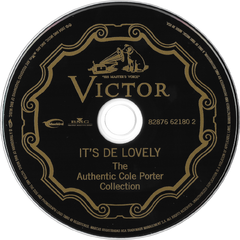 CD from album, mirrored to match the original 78rpm shellac

The song among others were originally recorded in 1934 by the composer himself for Victor Records and had long been regarded as "historical curiosities". As Cole Porter was described as a "horrible piano player", the track was overdubbed in 2004 with Vince Giordano and his Nighthawks to provide a "stylish, modern dance orchestra of the art deco era".

"Anything Goes" and "You're the Top" were both overdubbed in this manner for the 2004 album It's De-Lovely - The Authentic Cole Porter Collection. It coincided with the play's 70th anniversary and the release of the Cole Porter biographical film, De-Lovely.

This is the title song from the musical Anything Goes, by Cole Porter (1934). The musical was written in the depths of the 1930s U.S. depression. Millionaires had become penniless, but not everyone had - and everyone still loved thrilling entertainment. Echoes from this musical can be heard in such places as the movies Blazing Saddles and Indiana Jones and the Temple of Doom.

Jazz critic, Will Friedwald, described the session in the liner notes.[2]

This current collection illustrates Cole Porter's eternal topicality in more ways than one; now, for the first time, we have Cole Porter, singing his own songs, with full orchestral accompaniment. Porter himself was far from a virtuoso pianist like his younger contemporary George Gershwin, nor did he take the occasional opportunity to put his voice down on wax, like Harold Arlen. He enjoyed singing and playing his own songs at parties, but that was principally when he was young and unknown; once the great stars began singing his music, he no longer felt the urge to do so himself. In 1934 and '35, Porter recorded eight rather modest tracks for the Victor Corporation, including, most importantly, a few future standards from his most recent Broadway hit, Anything Goes, The tracks sound like songwriter demos, and, as comedian Bert Lahr (who starred in two Porter shows), observed, "Cole was a horrible piano player. He played with a slow, wooden tempo. If you didn't know who it was, you'd think it was a learner."

But at the same time, this is authentic Cole Porter, and thanks to producer Barry Feldman and bandleader and multi-instrumentalist Vince Giordano, the Cole Porter Victor tracks are no longer mere historical curiosities. Now we can hear what Porter would have sounded like had he taken his singing seriously enough to work with a stylish, modern dance orchestra of the art deco era. To make sure the band parts would have an absolutely authentic mid-'30s sound, Mr. Giordano unearthed six different charts on each song, including four from the band book of the period bandleader Arnold Johnson (who, coincidentally, had employed a young Harold Arlen as arranger and vocalist a few years earlier). Mr. Giordano and his aide-de-camp banjo-guitarist John Gill combined aspects of the different arrangements, and then finessed them to fit around the Porter recordings.

Where the orchestrations are for dance purposes, which is to say that they're predominantly instrumentals, with brief one-chorus vocal refrains in the middle (and usually a modulation to the vocal), the Porter performances are essentially vocal from beginning to end. Adjustments had to be made for the key for Anything Goes (Porter sings, surprisingly, in B flat, a full step below the published key of C, which is the key that the orchestrations are in). Vince notes that this idea of improving upon a classical recording after the fact is also part of the Victor Records heritage; a decade or so after the death of Enrico Caruso, Victor house musical director Nathaniel Shilkret added a modern, electrically recorded symphony orchestra to some of the great tenor's originally acoustically recorded masters. Nearly 70 years later, Giordano and his Nighthawks - now expanded to include a three-piece string section - listened with headphones to the composer's performance of 70 years ago to make sure everything synced up perfectly.

Times have changed,
And we've often rewound the clock
Since the Puritans got a shock
When they landed on Plymouth Rock.

If today
Any shock they should try to stem
'Stead of landing on Plymouth Rock,
Plymouth Rock would land on them.

In olden days, a glimpse of stocking
Was looked on as something shocking,
But now, God knows,
Anything goes.

Good authors, too, who once knew better words
Now only use four-letter words
writing prose.
Anything goes.

When every night, the set that's smart is intruding
In nudist parties
In studios.
Anything goes.

When Missus Ned McLean (God bless her)
Can get Russian reds to "yes" her,
Then I suppose
Anything goes.

When folks who still can ride in Jitneys
Find out Vanderbilts and Whitneys
Lack baby clo'es,
Anything goes.

When Sam Goldwyn can with great conviction
Instruct Anna Sten in diction,
Then Anna shows
Anything goes.

When you hear that Lady Mendl standing up
Now does a handspring landing up-
On her toes,
Anything goes.

So Missus R., with all her trimmins,
Can broadcast a bed from Simmons,
'Cause Franklin knows
Anything goes.