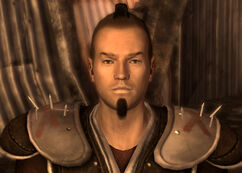 Nothin' But a Hound Dog
Saving (or Savaging) Sergeant Teddy

“When the Legion showed up, we fought, most tribes did. Hangdogs hung out longer than most... broke us by throwing our dogs on the fire.”

Antony is a houndmaster for Caesar's Legion living at The Fort in 2281.

Antony is a former member of the Hangdogs, a tribe hailing from Denver, Colorado known for their reverence for dogs as Hangdog spirit animals. Before Lanius put the hounds of the tribe to the torch and assimilated the tribe, he was an ardent worshiper of the Denver hounds.[1][2] When the Legion broke him and the rest of his tribesmen, he repressed the painful memories and put his talents to work as houndmaster.[3] A lifetime of working with canines certainly bore fruit, as his are some of the finest war dogs in the Legion.

Even if the Hangdogs have been wiped from history, Antony's mongrels are his life; he thinks very highly of their ability and finds them worthy of the utmost respect.[4][5] Lupa, the mother of many of the Legion's best hounds, is one of Antony's favorite bitches, and and would go to lengths to have her be made immortal, such as having her brain implanted in a cyberdog.[6][7]

Retrieved from "https://fallout.fandom.com/wiki/Antony?oldid=3355387"
Community content is available under CC-BY-SA unless otherwise noted.