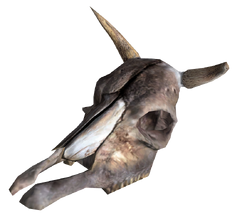 “Who is Antler? WHO IS ANTLER? Antler, the human asks about you! What do I tell it? All right. All right... Yes, yes, of course.Who Antler is, not important to you. Antler wants that you deal with me.”— Davison

Antler is the name given to the brahmin skull that Davison's nightkin worship, and they created "Antlerism" to show their devotion to it. It is in the basement level of the REPCONN test site in 2281.

Antler is a brahmin skull that Davison, a former captain in the Master's Army, picked up while he and his troop of nightkin wandered the wasteland. Nightkin develop a form of schizophrenia from prolonged Stealth boy use and so, because of this, they believe that the skull gives them orders and guidance.

Davison relates that his troops were suffering mentally from being separated from Master, and that since finding Antler to worship "everything's been going really well." Incidentally, Antler acts as a conduit for higher-tier planning that Davison would otherwise abandon in favor of brute force.

Retrieved from "https://fallout.fandom.com/wiki/Antler?oldid=2869886"
Community content is available under CC-BY-SA unless otherwise noted.