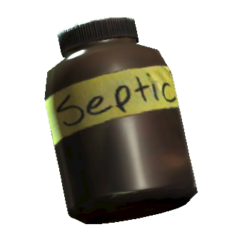 Antiseptic is a crafting component in Fallout 4.

A chemical used to kill disease-causing micro-organisms. It's used mainly for creating medicinal items such as stimpaks and RadAway.

Antiseptic can be used at a chemistry station to make medical items such as:

Retrieved from "https://fallout.fandom.com/wiki/Antiseptic_(Fallout_4)?oldid=3407817"
Community content is available under CC-BY-SA unless otherwise noted.