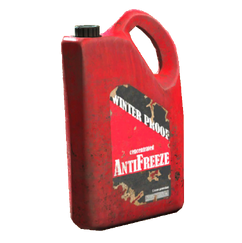 An anti freeze bottle is a junk item in Fallout 4.

A pre-War red plastic bottle that contains antifreeze. It can be used in crafting food, chems, syringer ammo, and reactor coolant, or it can be used as a junk item.

The anti freeze bottle can be broken down in to its individual components for use in crafting.

The anti freeze bottle can also be used as a component to produce berserk syringe, Yellow Belly syringe, Berry Mentats, reactor coolant (following the completion of the main quest with the Brotherhood of Steel) and indirectly, Fury at a chemistry station. It can also be used at a cooking station to produce mirelurk jerky.

Anti freeze bottles are relatively uncommon, used for several recipes, and can easily be dismantled for acid and plastic by accident. When crafting multiple items it is advisable to make the ones explicitly using the anti freeze bottle first, as one may consume all of them crafting other items with acid or plastic. For these recipes, it should be noted the suprathaw antifreeze is not able to be used, and so does not need to be preserved.

Retrieved from "https://fallout.fandom.com/wiki/Anti_freeze_bottle_(Fallout_4)?oldid=3282764"
Community content is available under CC-BY-SA unless otherwise noted.