Utilizing an ergonomic, metallic skeleton design with a free-floating barrel, the .50 Hécate II is a bolt-action, high caliber precision weapon intended for use against materiel and hard targets. For balance, the rifle includes a tapered barrel and a large muzzle brake to reduce recoil to manageable levels. Unlike most rifles, the AMR was designed from the ground up to be used at long and extreme ranges: It lacks any kind of sights, featuring instead a mounting rail for high powered scopes and a forward bipod mount.[2]

The GRA variant is similar in design principle to that of a sniper rifle, delivering a high-powered shot at long distances with great accuracy. It is specially chambered with a larger caliber for hardened targets, and as such has extremely high damage and low weapons spread, and is scoped with a magnification level of 3.13x. The damage benefits of the rifle are offset by the fact that it is bolt-action, greatly lowering the rate of fire and resulting in a low damage-per-second, and the weapon itself without modifications weighs in at 20 pounds, making it one of the heaviest shoulder-fired weapons in the game. The gun's recoil is extreme, causing each shot to push the player back a few inches.

The Gun Runners' Arsenal variant differs from the standard anti-materiel rifle, in that it was specially constructed by the Gun Runners to accept weapon modifications.

The anti-materiel rifle (GRA) can fire a total of about 470 standard rounds, the equivalent of 59 reloads, from full condition before breaking.

Anti-materiel rifle (GRA) with the custom bolt and suppressor modifications

Anti-materiel rifle (GRA) with all modifications

Anti-materiel rifle (GRA) in use 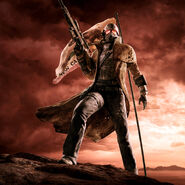 The AMR in key art
Add a photo to this gallery

Retrieved from "https://fallout.fandom.com/wiki/Anti-materiel_rifle_(GRA)?oldid=3430452"
Community content is available under CC-BY-SA unless otherwise noted.