The anti-materiel rifle is a weapon in the Fallout 4 Creation Club content "Anti-Materiel Rifle."

The raider Zane somehow acquired an anti-materiel rifle thanks to his "paper mirror" book. However, it was stolen by his subordinate Connor, who felt that Zane had become weak and planned to start his own raider gang. This particular AMR has the words "New California Republic" and two-headed bear icons engraved on it, suggesting that it once belonged to the NCR before making its way to the Commonwealth.

The anti-materiel rifle is a left-handed, bolt-action rifle that uses .50 caliber rounds. It has a high damage output per round, but low rate of fire due to the action type. While the anti-materiel rifle can be modified with enhanced magazines, it does not have the option of being modified with quick eject magazines, so the AP usage will increase when modifying the magazines. This rifle can be modified to fire the more common .38 round, but cannot be modified to accept .308 rounds.

While the crafting of the .38 receiver requires Gun Nut to be Rank 3, anti-materiel rifles with the .38 receiver attached will be sold by weapon vendors at lower levels; the cost will rarely be over 500 caps, even without a high Charisma stat or bartering perks. 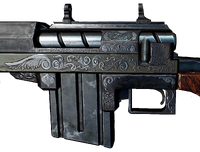 Close-up of the NCR engraving 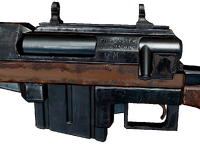 Close up of the hunter's receiver