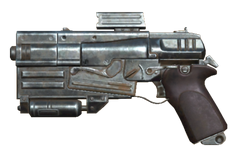 Stock version of this pistol is a long barrel, compensator, automatic receiver, and circle reflex sight. Unlike many other named variants of weapons, this pistol cannot be modified in any way.

Given to the player character by Bernie, along with a Fire Breather uniform and helmet, for reaching the final exam stage of Firebreather training. As with other quest-given items, the pistol's level depends on the player level when receiving it, and it can scale up to level 50 if the player is 50+ when starting the quest.

Retrieved from "https://fallout.fandom.com/wiki/Anti-Scorched_training_pistol?oldid=3035680"
Community content is available under CC-BY-SA unless otherwise noted.