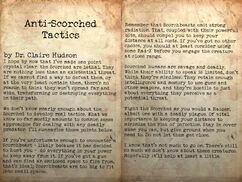 Anti-Scorched tactics is a paper note in Fallout 76.

This note can be found at the Charleston Fire Department, on a large metal desk in the classroom area.

by Dr. Claire Hudson
I hope by now that I've made one point crystal clear: the Scorched are lethal. They are nothing less than an existential threat. If we cannot find a way to defeat them, or at the very least contain them, there's no reason to think they won't spread far and wide, transforming or destroying everything in their path.

We don't know nearly enough about the Scorched to develop real tactics. What we know so far mostly amounts to common sense approaches for dealing with any deadly predator. I'll summarize those points below.

If you're unforunate enough to encounter a Scorchbeast - likely because it has decided to hunt you - do everything in your power to keep away from it. If you've got a gun and can find an enclosed space to fire from, that's ideal; Scorchbeasts are too big to fit into small spaces.

Remember that Scorchbeasts emit strong radiation. That, coupled with their powerful bite, should compel you to keep your distance at all costs. If you've got no other choice, you should at least consider using some Rad-X before you engage the creature at close range.

Scorched humans are savage and deadly. While their ability to speak is limited, don't think they are mindless. They retain enough intelligence and memory to use guns and other weapons, and they're hostile to just about everything they perceive as a potential threat.

Fight the Scorched as you would a Raider, albeit one with a deadly plague. Of vital importance is keeping your distance to minimize the risk of infection. Stay in cover when you can, but give ground when you need to. Do not let them get close.

I know that's not much to go on. There's still so much we don't know about these creatures. Hopefully it'll help at least a little.

Retrieved from "https://fallout.fandom.com/wiki/Anti-Scorched_tactics?oldid=3237831"
Community content is available under CC-BY-SA unless otherwise noted.